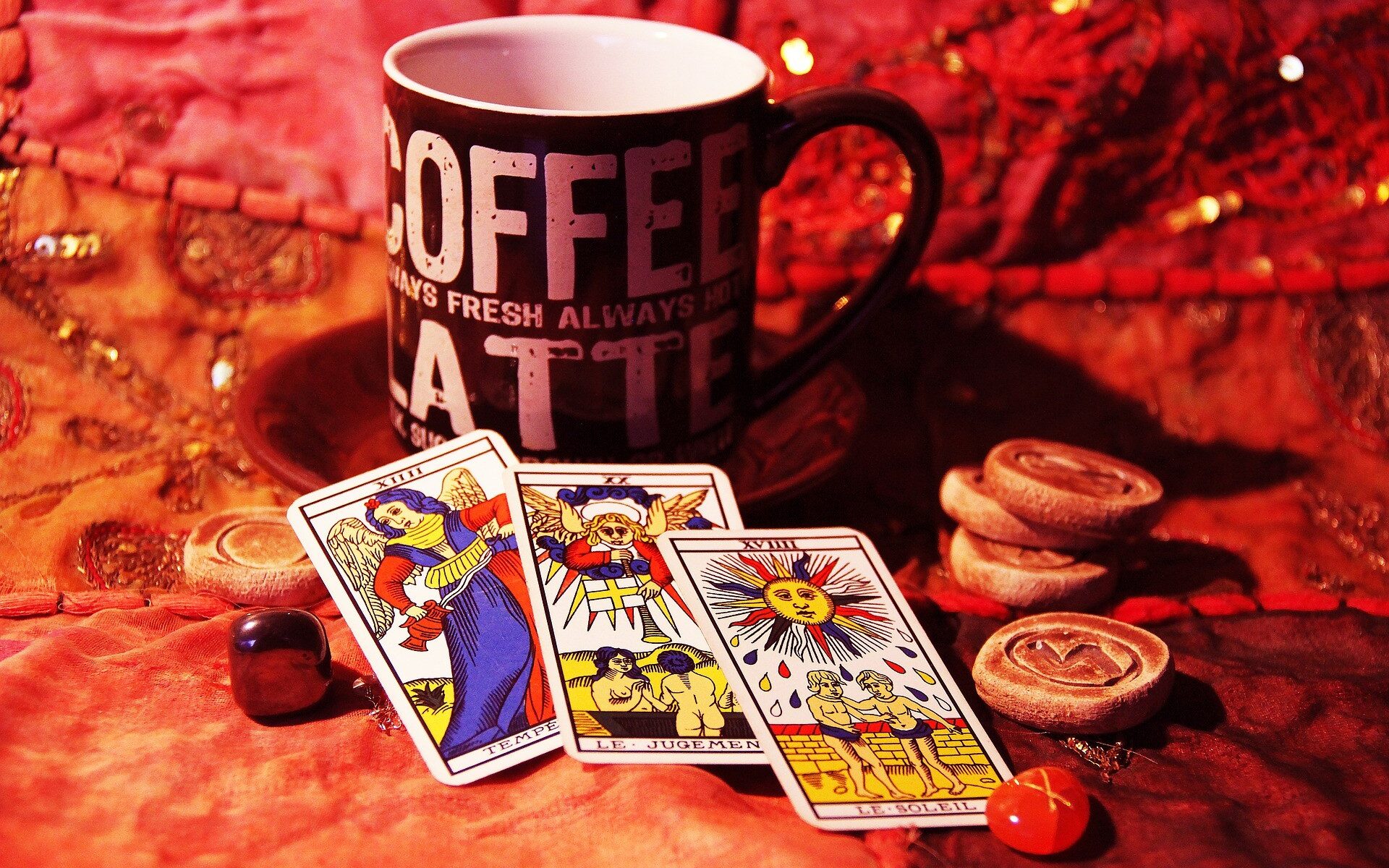 As Interpreted in The Pictorial Key to the Tarot by A.E. Waite (1910)

Spin the wheel to draw your four cards 🃏 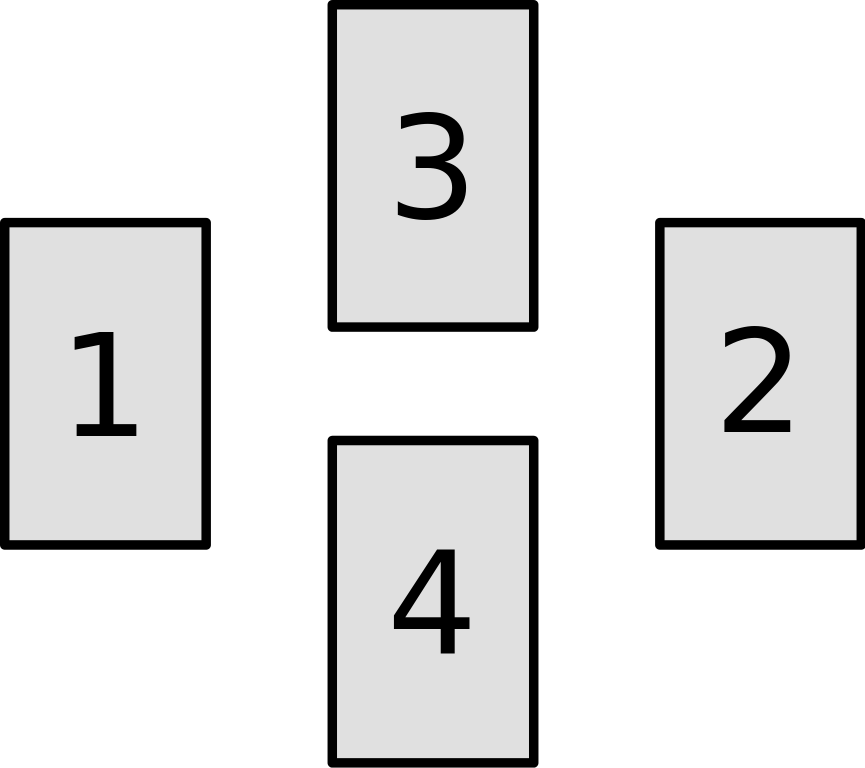 THE GREATER ARCANA AND THEIR DIVINATORY MEANINGS

THE HIGH PRIESTESS.–Secrets, mystery, the future as yet unrevealed; the woman who
interests the Querent, if male; the Querent herself, if female; silence, tenacity; mystery, wisdom, science. Reversed: Passion, moral or physical ardour, conceit, surface knowledge.

THE HIEROPHANT.–Marriage, alliance, captivity, servitude; by another account, mercy and
goodness; inspiration; the man to whom the Querent has recourse. Reversed: Society, good
understanding, concord, overkindness, weakness.

JUSTICE.–Equity, rightness, probity, executive; triumph of the deserving side in law.
Reversed: Law in all its departments, legal complications, bigotry, bias, excessive severity.

DEATH.–End, mortality, destruction, corruption also, for a man, the loss of a benefactor for a woman, many contrarieties; for a maid, failure of marriage projects. Reversed: Inertia, sleep, lethargy, petrifaction, somnambulism; hope destroyed.

THE DEVIL.–Ravage, violence, vehemence, extraordinary efforts, force, fatality; that which
is predestined but is not for this reason evil. Reversed: Evil fatality, weakness, pettiness, blindness.

THE TOWER.–Misery, distress, indigence, adversity, calamity, disgrace, deception, ruin. It is
a card in particular of unforeseen catastrophe. Reversed: According to one account, the same in a lesser degree also oppression, imprisonment, tyranny.

THE SUN.–Material happiness, fortunate marriage, contentment. Reversed: The same in a
lesser sense.

It will be seen that, except where there is an irresistible suggestion conveyed by the surface meaning, that which is extracted from the Trumps Major by the divinatory art is at once artificial and arbitrary, as it seems to me, in the highest degree. But of one order are the mysteries of light and of another are those of fantasy. The allocation of a fortune-telling aspect to these cards is the story of a prolonged impertinence.

SOME ADDITIONAL MEANINGS OF THE LESSER ARCANA

WANDS.King.–Generally favourable may signify a good marriage. Reversed: Advice that should be followed.
Queen.–A good harvest, which may be taken in several senses. Reversed: Goodwill towards the Querent, but without the opportunity to exercise it.
Knight.–A bad card; according to some readings, alienation. Reversed: For a woman, marriage, but probably frustrated.
Page.–Young man of family in search of young lady. Reversed: Bad news.
Ten.–Difficulties and contradictions, if near a good card.
Nine.–Generally speaking, a bad card.
Eight.–Domestic disputes for a married person.
Seven.–A dark child.
Six.–Servants may lose the confidence of their masters; a young lady may be betrayed by a friend. Reversed: Fulfilment of deferred hope.
Five.–Success in financial speculation. Reversed: Quarrels may be turned to advantage.
Four.–Unexpected good fortune. Reversed: A married woman will have beautiful children.
Three.–A very good card; collaboration will favour enterprise.
Two.–A young lady may expect trivial disappointments.
Ace.–Calamities of all kinds. Reversed: A sign of birth.
Cups. King.–Beware of ill-will on the part of a man of position, and of hypocrisy pretending to help. Reversed: Loss.
Queen.–Sometimes denotes a woman of equivocal character. Reversed: A rich marriage for a man and a distinguished one for a woman.
Knight.–A visit from a friend, who will bring unexpected money to the Querent. Reversed:
Irregularity.
Page.–Good augury; also a young man who is unfortunate in love. Reversed: Obstacles of all kinds.
Ten.–For a male Querent, a good marriage and one beyond his expectations. Reversed: Sorrow; also a serious quarrel.
Nine.–Of good augury for military men. Reversed: Good business.
Eight.–Marriage with a fair woman. Reversed: Perfect satisfaction.
Seven.–Fair child; idea, design, resolve, movement. Reversed: Success, if accompanied by the Three of Cups.
Six.–Pleasant memories. Reversed: Inheritance to fall in quickly.
Five.–Generally favourable; a happy marriage; also patrimony, legacies, gifts, success in
enterprise. Reversed: Return of some relative who has not been seen for long.
Four.–Contrarieties. Reversed: Presentiment.
Three.–Unexpected advancement for a military man. Reversed: Consolation, cure, end of the business.
Two.–Favourable in things of pleasure and business, as well as love; also wealth and honour.
Reversed: Passion.
Ace.–Inflexible will, unalterable law. Reversed: Unexpected change of position.
SWORDS. King.–A lawyer, senator, doctor. Reversed: A bad man; also a caution to put an end to a ruinous lawsuit.
Queen.–A widow. Reversed: A bad woman, with ill-will towards the Querent.
Knight.–A soldier, man of arms, satellite, stipendiary; heroic action predicted for soldier.
Reversed: Dispute with an imbecile person; for a woman, struggle with a rival, who will be
conquered.
Page.–An indiscreet person will pry into the Querent’s secrets. Reversed: Astonishing news.
Ten.–Followed by Ace and King, imprisonment; for girl or wife, treason on the part of friends. Reversed: Victory and consequent fortune for a soldier in war.
Nine.–An ecclesiastic, a priest; generally, a card of bad omen. Reversed: Good ground for
suspicion against a doubtful person.
Eight.–For a woman, scandal spread in her respect. Reversed: Departure of a relative.
Seven.–Dark girl; a good card; it promises a country life after a competence has been secured.
Reversed: Good advice, probably neglected.
Six.–The voyage will be pleasant. Reversed: Unfavourable issue of lawsuit.
Five.–An attack on the fortune of the Querent. Reversed: A sign of sorrow and mourning.
Four.–A bad card, but if reversed a qualified success may be expected by wise administration of affairs. Reversed: A certain success following wise administration.
Three.–For a woman, the flight of her lover. Reversed: A meeting with one whom the Querent has compromised; also a nun.
Two.–Gifts for a lady, influential protection for a man in search of help. Reversed: Dealings with rogues.
Ace.–Great prosperity or great misery. Reversed: Marriage broken off, for a woman, through her own imprudence.
PENTACLES. King.–A rather dark man, a merchant, master, professor. Reversed: An old and vicious man.
Queen.–Dark woman; presents from a rich relative; rich and happy marriage for a young man. Reversed: An illness.
Knight.–An useful man; useful discoveries. Reversed: A brave man out of employment.
Page.–A dark youth; a young officer or soldier; a child. Reversed: Sometimes degradation and sometimes pillage.
Ten.–Represents house or dwelling, and derives its value from other cards. Reversed: An occasion which may be fortunate or otherwise.
Nine.–Prompt fulfilment of what is presaged by neighbouring cards. Reversed:Vain hopes.
Eight.–A young man in business who has relations with the Querent; a dark girl. Reversed: The Querent will be compromised in a matter of money-lending.
Seven.–Improved position for a lady’s future husband. Reversed: Impatience, apprehension, suspicion.
Six.–The present must not be relied on. Reversed: A check on the Querent’s ambition.
Five.–Conquest of fortune by reason. Reversed: Troubles in love.
Four.–For a bachelor, pleasant news from a lady. Reversed: Observation, hindrances.
Three.–If for a man, celebrity for his eldest son. Reversed: Depends on neighbouring cards.
Two.–Troubles are more imaginary than real. Reversed: Bad omen, ignorance, injustice.
Ace.–The most favourable of all cards. Reversed: A share in the finding of treasure.